Battery-based sensor networks usually operate in harsh and dangerous remote environments that are inaccessible to people, such as volcanic zones and war zones. Power replacement or recharging of network nodes is usually impossible. The sensor nodes widely distributed in the tested environment must be responsible for collecting sensitive data, but also to complete the function of data transmission routing; moreover, an attacker may also use the encroaching node to inject a large number of false data packets into the network, causing the node to transmit These data packets run out of energy and lose their effectiveness. Therefore, the irreplaceability of the power supply of the network nodes makes the energy consumption problem particularly important compared to other key technologies of the sensor network; without affecting performance, designing effective energy consumption control strategies has become the core of the sensor network software and hardware design problem.

A typical sensor network architecture is usually composed of distributed sensor nodes, receivers and transmitters, the Internet, and user interfaces. Among them, the sensor node as an independent working entity in the network, its basic functional subsystems include power supply subsystem, sensor subsystem, computing subsystem and communication subsystem, as shown in Figure 1.

The power supply subsystem consists of modules such as batteries and ACDC converters. Its main task is to supply energy to other subsystems.

As the main energy source of the node, the battery's performance and capacity are very important. Although increasing the battery capacity can extend the energy supply time of the power supply subsystem, the use of effective recharging technology or renewable energy such as solar energy is more conducive to ensuring the energy source of the power supply subsystem and achieving continuous energy supply for other subsystems. A new i? Bean wireless transmitter based on i? Bean wireless technology and "energy acquisition" technology, which operates on an inductive oscillation energy converter [3], can be powered by 50 to 100 mg without battery power. The 28 to 30 Hz oscillation under force generates a voltage of 1.2 to 3.6 mV and allows data to be transmitted at a rate of 115 kbps over a distance of 30 m. Solution.

The sensing subsystem is composed of a group of sensors and ADC controller, etc. The main task is to be responsible for sampling / collecting the sensitive information of the measured and controlled object and converting it into corresponding digital information. 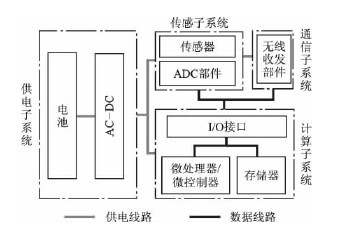 The computing subsystem includes microprocessors / microcontrollers, memory and I / O interface circuits and other hardware; it is responsible for controlling sensors, executing communication protocols and processing sensor data and other software algorithms; it is the node's control and computing core.

Self-organized cluster generation, transmission data encryption / decryption, and establishment and maintenance of communication links are all performed by executing corresponding instruction sequences. The more complex the algorithm, the more instructions, and the energy consumed The bigger. However, the algorithm is a contradictory unity of validity, reliability and complexity. Effective and reliable algorithms often have higher complexity; the effectiveness and reliability of simple algorithms may not be suitable for application needs. The diversity and uncertainty of the application environment make the energy consumption of software algorithms much more difficult to control than the energy consumption of hardware. It is necessary to meet the needs of the application environment and reduce the complexity of software algorithms as much as possible.