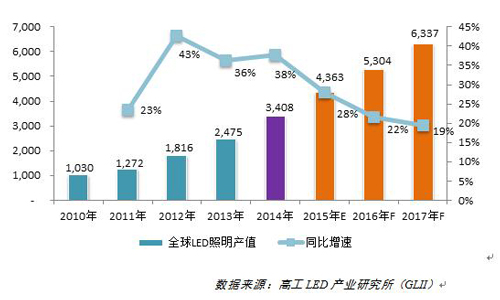 Benefiting from the policy promotion support of various countries and regions around the world, as well as the overall cost performance of LED lighting products, Gaogong LED Industry Research Institute believes that the scale of global LED lighting products will maintain a relatively rapid growth in the next two or three years. GLII expects that by 2017, the global LED lighting output value will exceed 600 billion yuan, and the compound growth rate is expected to reach 23% in the next three years.

The Ultrasonic Transducer is a kind of transducer that converts the ultrasonic signal into electric signal, or vice versa. Ultrasound transmitter and receiver is a transducer that can transmit and receive ultrasound. Ultrasound sensor is a kind of sensor, in essence, it is also a transmitter and receiver. The working principle of this kind of equipment is similar to that of radar and sonar. Active ultrasonic sensors can emit and receive reflected waves, and determine the distance of the target by measuring the time interval between transmission and reception. Passive Ultrasonic Sensor is actually a microphone that can convert ultrasonic signal into electrical signal.