According to the national new energy automobile industry development plan, 2010 to 2015 is the key five years of electric vehicle industrialization and large-scale promotion and application. Relevant research shows that 2016 is the turning point of the development of electric vehicle industrialization. The development of electric vehicles has entered a high-speed growth period. It is estimated that by 2020, the size of the electric vehicle market in Shanghai is expected to reach about 350,000 (according to the market penetration rate of 15%) . A large number of vehicle charging will bring a new round of rapid load growth, with a capacity of 12 kWÂ·h per vehicle. The electricity used by these electric vehicles for daily charging is about 3.36 million kWÂ·h (calculated at the same rate of 0.8). This increases the enormous power generation, transmission and distribution pressures of power systems with increasing peak-to-valley differences in electrical load.

This article refers to the address: http://

Vehicle to Grid (V2G) technology is the two-way interaction and exchange between electric vehicles and the grid under controlled conditions. It is an important part of â€œsmart grid technologyâ€, applying V2G and smart grid technology. The charging and discharging of the electric vehicle battery is uniformly deployed. According to the established charging and discharging strategy, the remaining electric energy can be controlled and fed back to the power grid in two directions under the premise of satisfying the driving demand of the electric vehicle user. 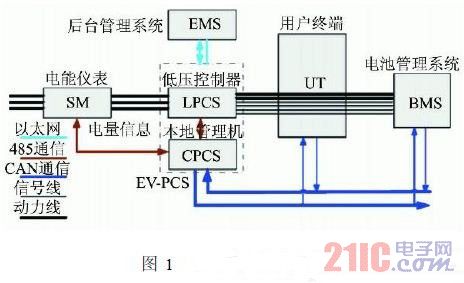 EV2PCS: Two-way intelligent charging and discharging device, which consists of a low-voltage controller and a local management machine, is used to realize two-way energy interaction between the vehicle and the power grid, and is a key device of the V2G system;

UT: Human-computer interaction terminal is an interface between the electric vehicle user and the power grid, and the user obtains the power consumption and electricity fee information from the user;

As a key power component in V2G technology, the two-way intelligent control device is used to realize the bidirectional flow of energy between the power grid and the electric vehicle. It can work in the charging mode and the V2G mode: if the charging working mode is selected, only the charging operation of the vehicle is performed, The vehicle battery energy is fed back to the power grid; if the V2G working mode is selected, the device can charge and discharge the connected vehicle according to the upper and lower thresholds of the vehicle SOC selected by the user on the human-machine interaction terminal, or the default upper and lower thresholds of the SOC of the device. The real-time capacity, controlled time and other information are provided to the background management system, and the background management system issues a charge and discharge control command, and the device performs charging and discharging operations according to the current SOC of the vehicle battery to realize two-way flow of energy. Figure 2 shows the main loop topology of the two-way intelligent control unit.

Its topology features are as follows:

(1) Three-phase full-bridge bidirectional PWM conversion can be used to charge and discharge the battery;

(3) At the same time, the isolation transformer can perform voltage matching between AC and DC;

(4) An overload overcurrent circuit breaker is configured on the AC side and the DC side;

(5) The AC DC side is equipped with a pre-charging circuit, and the starting mode is flexible;

(6) Adopting a first-stage converter, the topology is simple and the reliability is high. 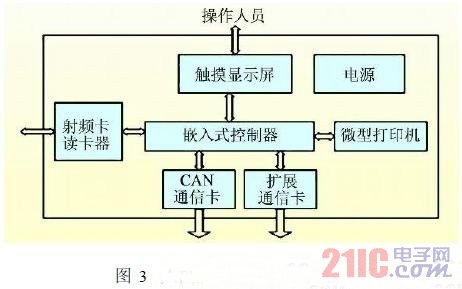 The background management system includes a charge and discharge strategy control subsystem and an energy management subsystem; the main function of the charge and discharge strategy control subsystem is to use the appropriate charge according to the total chargeable and discharge capacity, electricity price and real-time load information of the current power grid provided by the energy management system. The discharge strategy algorithm calculates the actual allowable charging or discharging capacity of the power grid, thereby dynamically realizing the two-way energy exchange between the vehicle battery pack and the power grid. The main function of the energy management subsystem is to monitor the working status of the vehicle battery pack in real time and provide the basis for charging and discharging strategies. Data, providing a secondary allocation command for charging or discharging capacity for each EV2PCS.

The Battery Management System (BMS) is the most comprehensive device for understanding the battery performance and status of the vehicle. It establishes a connection between the BMS and the EV2PCS, enabling the charging device to understand the battery information in real time, changing its execution strategy and input and output current to ensure vehicle operation. , battery safety and extended service life. The main functions of BMS include: real-time monitoring of battery operating status; data acquisition, display and transmission of voltage, current, temperature, SOC, battery fault diagnosis, alarm and safety protection; fault self-test and diagnosis; charge and discharge equalization; and vehicle control Two-way communication between the system and the intelligent charge and discharge charging device. 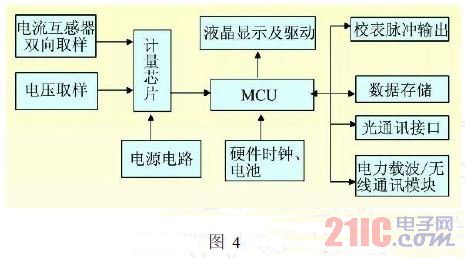 The V2G charging and discharging process is shown in Figure 5 and Figure 6, respectively. 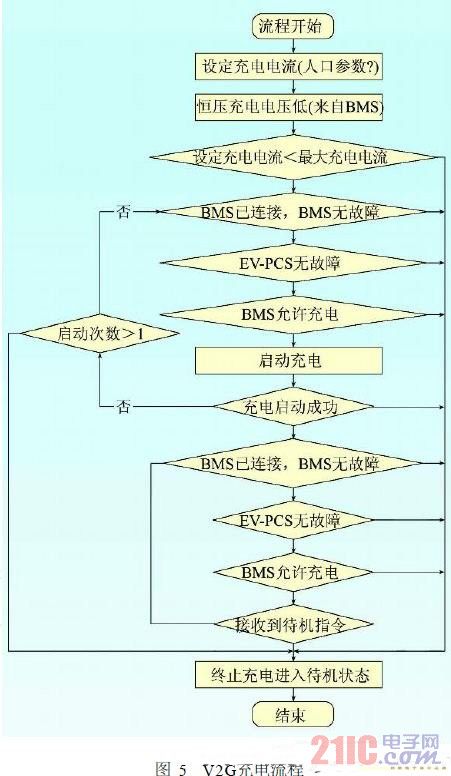 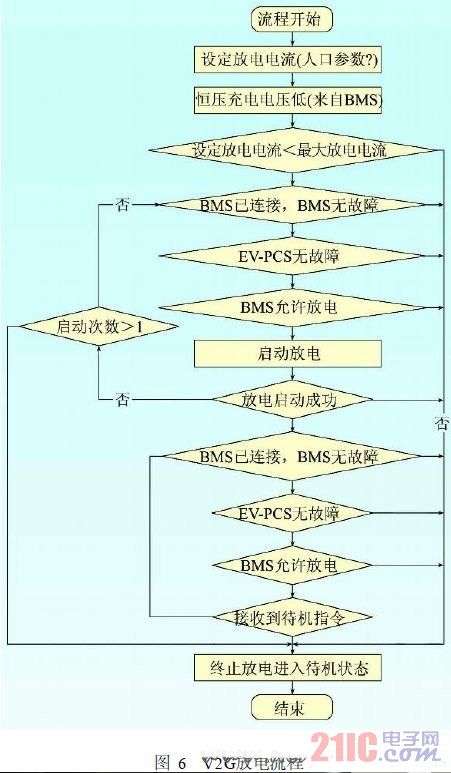 The user first inserts the IC card, and the UT terminal reads the user information through the RF card reader, and displays the remaining power on the card and the last consumption record on the man-machine interface. After the user sets the working mode and related information, the user is prompted. Connect the charging plug correctly and confirm the charging mode or V2G mode.

After the working mode is determined, the UT will confirm whether the charging and discharging interface is correctly connected with the EV2PCS. After confirming, the control signal is sent to the EV2PCS, and the operation of the charging device EV2PCS is started to wait for the background control command.

The EV2PCS executes the background charge and discharge command according to the operation mode selected by the user. During the operation, the UT periodically acquires the meter data, the battery pack data, performs billing, and saves the data. When the parameter set by the user is reached or the user terminates itself, the stop command is sent to the EV2PCS to control the EV2PCS to be powered off, and the user is prompted to charge and discharge on the man-machine interface. After the user unplugs the plug, the print ticket operation can be performed.

(6) Charging the vehicle with clean energy.

As a mobile energy storage device, the electric vehicle is connected to the power grid, and the two-way interaction with the grid energy is premised on ensuring that the convenience of the user is not affected. At present, the maximum driving range of pure electric small passenger cars is generally less than 200 km, and the actual service life of the battery is less than 1000 cycles, which is far lower than that of conventional fuel vehicles. Therefore, it is very important to adopt appropriate control strategies.

The strategic considerations involve the grid side, the vehicle side, and the user side. The grid side needs to consider the grid real-time load, electricity price, and dispatch center command; the vehicle side needs to consider the battery energy state, input and output power, available time, etc.; the user side mainly considers the user's Driving habits, mileage and special needs. Based on the data of charge and discharge capacity, grid load, electricity price, etc., the appropriate charge and discharge strategy control algorithm is used to obtain the energy information required by the power grid in the jurisdiction and the energy information that the vehicle battery can provide, and to allocate policies and issue dispatch instructions.

Electric vehicle is the ultimate development direction of the automobile industry. Smart grid is an inevitable trend of economic and technological development. The combination of electric vehicle and smart grid V2G not only solves the charging pressure problem brought by the large-scale development of electric vehicles, but also can be electric. As a mobile and distributed energy storage unit, the vehicle is connected to the power grid for peak-filling, emergency security, and rotating standby. It can delay the investment in power grid construction while improving grid power supply flexibility, reliability and energy utilization efficiency. The Shanghai Electric Power Technology and Development Center is the earliest institution to carry out V2G technology research in China. It has collected a large number of V2G related technology research and development trends, established extensive cooperative relations with domestic and foreign scientific research institutions and enterprises, and started the V2G application pilot and demonstration. At present, the research and application of V2G is still in its infancy, and its development is closely related to the development of related technologies such as electric vehicles, energy storage and distributed power.