The purpose and function of equipment detection is to reduce and avoid interference from the source. With the development of radio communication technology, the electromagnetic environment is becoming more and more complex, and radio interference is becoming more and more complicated. Under such circumstances, the importance of inspection work is self-evident. To do a good job in testing, you need to start with four parts, namely, test instruments, equipment under test, test standards and test methods. We have a lot of analysis on test instruments, test standards and test methods. However, the analysis and research on the tested equipment is equally important for our testing work.

CDMA is the abbreviation of Code Division MulTIple Access in English. Chinese translation is code division multiple access, which is code division multiple access. It is one of the advanced technologies widely used in the communication field. Based on the spread spectrum technology, the pseudo-random sequence formed by the spread spectrum technology is used to implement multiple access. In other words, in the CDMA communication system, the signals used by different users to transmit information are not differentiated by different frequencies or time slots, but Differentiated by different coding sequences.

The receiving end recovers the original information through two steps of despreading and demodulating. Despreading is the receiver multiplying the received spread spectrum signal by the same pseudo-random sequence, also known as correlation reception. The despread signal can be recovered by conventional demodulation.

As mentioned in the first part, pseudo-random sequences are very important and critical in CDMA communications. The Welsh sequence used in CDMA systems is variable in length, with 64 Welsh codes, 128 Welsh codes, and 256 Welsh codes. Let's take the 64 Welsh code as an example to illustrate the CDMA wireless transmit channel.

The pilot channel transmits a continuous pilot signal transmitted by the base station. The pilot signal is a non-modulated direct sequence spread spectrum signal that allows the mobile station to quickly and accurately capture the timing information of the channel and extract the coherent carrier for signal demodulation. The mobile station can determine when a handover is needed by detecting and comparing the pilot signals of different base stations.

The paging channel transmits information of the paging mobile station during the call connection phase. The mobile station typically selects a paging channel (also stipulated by the base station) to monitor the paging messages and other commands sent by the system after the synchronization is established. When the communication service is long, it can be changed to a traffic channel until it is completely used up.

The forward traffic channel has four transmission rates (9600 bit/s, 4800 bit/s, 2400 bit/s, 1200 bit/s) that can be changed frame by frame to dynamically adapt to the voice characteristics of the communicator.

Through the first two parts of the communication principle and the description of the wireless channel, we have an overall understanding of the CDMA communication process and the physical layer structure of the wireless interface. Next, the CDMA base station transmission performance will be described from the specific indicators in combination with the actual work.

(1) Definition: Refers to the total transmit power of the base station under full load.

(4) Requirement: Between +2 dB and -4 dB of the manufacturer's specified power rating.

(1) Definition: The ratio of pilot channel power to total power.

(2) Significance: Determines the coverage of the mobile station by the base station.

(3) Impact on the network: When the pilot power seriously deviates from the ideal value, it will affect the coverage characteristics of the network.

(4) Requirement: Between Â±0.5 dB of the configured value.

(2) Significance: The ability of the base station to accurately control the power of each Welsh code is a prerequisite for handling vulnerable RF multi-user links, ensuring interference-free transmission.

(3) Impact on the network: The deviation of the code domain power from the standard value will affect the communication quality.

(4) Requirement: The power of each inactive channel should be 32 dB lower or lower than the total output power.

(2) Significance: Occupied bandwidth is a basic characteristic of a base station.

(4) Requirement: Meets the frequency template and is currently less than 2 MHz.

(2) Significance: Ensure that the transmission channel does not cause interference to adjacent channels.

(3) Impact on the network: The frequency tolerance exceeds the allowable value and causes interference to adjacent channels.

(2) Meaning: Ï indicates the closeness of the actual transmitted signal and the ideal CDMA signal power distribution. It can be judged whether the modulation quality is good or bad. The closer the Ï value is to 1, the closer the actual signal is to the ideal signal.

(3) Impact on the network: Poor waveform quality will reduce the efficiency of the system and the quality of communication.

(1) Definition: The transmission of the out-of-band frequency at the assigned CDMA frequency.

(2) Meaning: Check the CDMA signal for radiation outside the channel.

(3) Impact on the network: too large spurs will cause interference to other CDMA channels or other communication bands.

1 Spurious emissions in the cellular band

In the bandwidth of 869 MHz to 894 MHz, the ratio of the measured total spurious emission power level to the average output power level at 30 kHz resolution bandwidth should meet the following requirements: 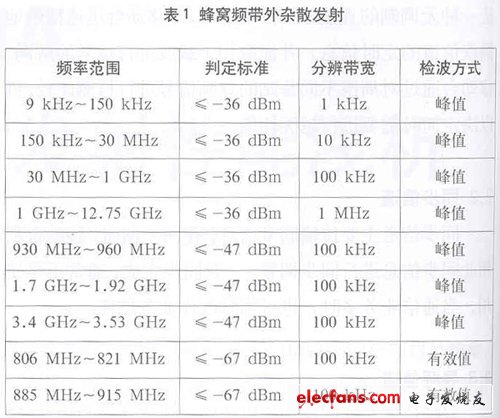 For frequencies other than 869 MHz to 894 MHz, the spurious emission indicators are shown in Table 1.

Mist Sprayer Drone carries a light smlog machine and use for the trees with dense leaves.