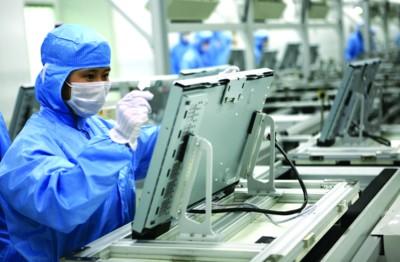 Institutions look down on the fourth quarter

In the "2013 third quarter of China's electronic information industry economic operation and color TV industry research conference", the Deputy Director of the Department of Operations of the Ministry of Industry and Information Technology Gao Sumei on the scene released "the third quarter of China's electronic information industry operation communique." Data show that since the beginning of March this year, the home audio-visual industryâ€™s export delivery value has been negative for six consecutive months. As of the end of August, the export delivery value was 173.1 billion yuan, a year-on-year decrease of 7.8%, and a decrease of nearly 12 percentage points from the beginning of the year. It dropped 7.4 percentage points over the same period.

The sluggish overseas market has caused export resistance and the domestic market is facing the dilemma of policy sequelae. Under the double killing, the TV industry encountered Waterloo in the third quarter. Aowei Consulting's data shows that in the third quarter of this year, the retail sales of domestic color TV reached 10.84 million units, down 6.4% year-on-year, and retail sales was 39.4 billion yuan, down 0.5% year-on-year. The agency believes that the leading cause of the market downturn is the energy-saving subsidy policy advance overdraft the market, in addition to deterioration of the financial environment to reduce consumer confidence; property market down the suppression of consumer electronics consumption.

Since May 2013, the consumer confidence index has shown a downward trend. According to data released by the National Bureau of Statistics, the year-on-year growth in the sales area of â€‹â€‹commercial housing in China and the year-on-year growth in the sales of commercial housing have both declined since the beginning of 2013. The growth rate of the property market has slowed down, and the consumption of home appliances has been suppressed, resulting in the third quarter of color TV. The market is down.

Some industry insiders believe that after the market has been digesting for some time, the color TV market will recover as the downstream demand gradually recovers. However, Aowei Consulting has a bearish view. It is expected that the total TV market sales in the fourth quarter of this year will reach 12.72 million units, down 2.8% year-on-year, and the overall sales volume will be 48 billion yuan, an increase of only 5% year-on-year.

For color TV new energy efficiency standards, the data show that only 16% of models sold from January to September are not up to standard; according to sales statistics, only 3% are not up to the standard, and manufacturers have a one-year buffer period to digest substandard inventory products. Aowei Consulting believes that the implementation of the new standard will help the industry to develop energy-saving and environmental protection, but it will have little impact on the color TV market.

Although this year's color TV industry has opened higher and lower, it is the most lively year in recent years. After the smart TV experienced tepid, with the Internet companies injecting living water, the entire industry began to be fully lived, the television industry is no longer the stage of the hardware factory, Le Shi, Xiaomi and other Internet companies, China, the number of knowledge providers, and even other content providers, and even Local set-top box manufacturers such as Chau Electronics have also started to compete in the â€œlast screenâ€ competition, and the profit model of the industry chain is being subverted.

Analysts said that from a past point of view, the rules of the industry will face the situation that the Internet has gone through, and the color TV industry will be the same. For consumers, the price of traditional color TV is broken by Internet companies. LeTV and Xiaomi have repeatedly challenged the â€œbottom lineâ€ of color TV prices; for manufacturers, the marginal industry margins are facing severe challenges, whether it is Material processing or the vertical industry chain business model can no longer support the model of profitable hardware. Under the siege of Internet companies, traditional TV manufacturers have aggressively strengthened their smart TV business in the past few years.

On the other hand, channel changes in home appliance sales are still ongoing. Statistics show that currently 42% of consumers in first- and second-tier cities choose to purchase color TVs through e-commerce channels. In the third quarter of this year, the market share of color cables reached 10.4%, an increase of 84% year-on-year, showing a development trend of blowouts. .

Our products meet standard IEC60169, IEC61169 and MIL-PRF-39012. Our main products are as follows: FAKARA, MMCX, MCX,SMP, SSMA, SSMB, SMA, SMB, SMC, SAA(1.0/2.3), SMZ(BT43), C4(DIN41626), M4, L9(1.6/5.6), BNC, TNC, N, L29(7/16 DIN), F, TV, etc. Also, we can design and manufacture products with special requirements by customers.The majority of our products are sold to overseas.Shareconn has specialized in the development and manufacture of Rf Connectors, and Cable Assemblies. We offer fast and flexible services to our clients in the RF sector, and have obtained RoHS, REACH, FOS, PFOA, ODS and IMDS approvals for our products. And operations at our production facilities are ISO 9001- and ISO 14001-certified.

Receive Samples Faster than Ever
Our R&D team can help you stay ahead of market trend by creating the latest RF products for new standards as they appear. And we guarantee that our samples will be delivered faster than other makers.

Garmin, Asus and TSMC Source from Us
Our international sales network extends to Europe, the US, Asia and the Middle East. While we manufacture large volumes for Garmin, Asus and TSMC, we welcome small, mixed orders too. No matter the size of your order, we will process it as soon as we received your request - competitors often make you wait. Contact us today.